I am not exactly sure about that ´walk in the park´-thing. It is correct that we walked some parts of the track – but this park? I mean, seriously? A bit huge for a park in the Netherlands, or? Maybe I just got it wrong? One does always come back with more questions from the Dutch Coast Ultra Run by Night then there were before the run.

Jacky and me took the train from Aachen to Den Helder – tradition is tradition. The whole dutch coast ultra runners arrived and many hands were shaken. When you sign up for such a race for the third time in a row you know a lot of people. Such a nice and warm welcome :). Thank you dutch coast ultra family :)!

One can not say it too often: special thanks to Ferry, Rinus, Ron and all the other helping hands – you do organize a great race and judging the FB reactions I am not the only one with these feelings! When I understood it correctly: there is even a chance for a 2019 edition – perfect. Before the race I was afraid that it might be the last torture this year.

Marc, who thought would run his first ever 75k run, arrived together with his supporter Axel from the north of Germany. The three of us decided to run together as long as it would work out. At 10 o’clock in the evening the race started in Den Helder. I think I don’t have to describe the route too much, as there are plenty of information about that already posted on this blog here, here, here and here. It turned out that our group worked perfectly. We found a pace comfortable for all of us and really enjoyed this perfect night. The conditions were easy: no wind, half-moon, nothingness… We ran for hours at the beach without any light necessary, talking, thinking, laughing and being really tiny at this endless beach. At one point the moon decided to take a bath in the ocean… Some attempted to join our trio, but with most of them the pace didn’t match for a longer time. Especially this one was pretty lazy…

After 5:40 hour we arrived at the first real checkpoint at km 50. We enjoyed some minutes in the warmth, had coffee and tea, met Axel and finally decided to continue.

A bit slower we continued with the second part of the race: km 50 to 75 with the long period running in the orange colored habor of Ijmuiden. Always strange to run there. Never sleeping, ever glowing, always under construction – feels like a different planet.

During the last kilometres on our way to checkpoint km 75, Marc did something strange. As if the spirit of the run changed him: he decided to upgrade. Maybe he thought first-time-75-in-his-live would sound even nicer with a 100 in there?! Who knows. With Axel switching from supporting to running and some other racers joining and leaving again we did the last 25k – aka the dunes – in a pack of 5-7 runners.

It was beautiful, stunning, amazing, exhausting, demanding, difficult, hard, never ending, scratchy and it was wet:

Thanks again Ferry: especially the changes during the last kilometres of the race made us laugh and cry at the same time – amazing selection!

As in 2016 and 2017 it took almost all given time (13:51 h out of 14 h time limit) to finish the Dutch Coast Ultra Run by Night (and day). Although the weather sticked to the ´walk-in-the-park´ motto of this years edition – it remains a challenge to finish. But we made it. And we made it together. It was the third official 100k for Jacky, it was Marcs first 100k ever. And he did it just like that and out of nothing. Not a single complaint. Impressive! His longest distance before was 60something. I still wonder what made him continue at the lovely breakfast location aka km 75/finish.

Lets do a quick check:

Ok – that really helped a lot! See you on Friday in Den Helder! 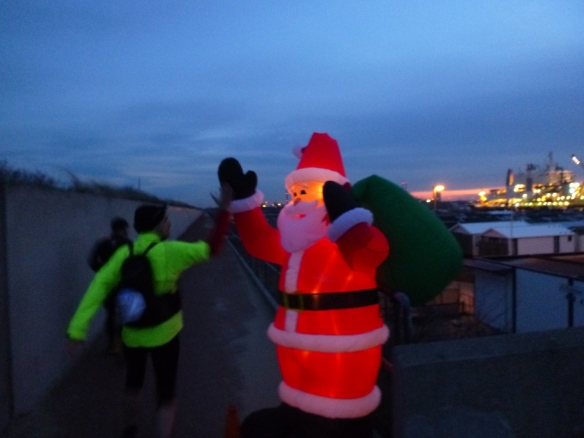